↑
Home∕Moebio∕Prizes that look to the future

Prizes that look to the future

Last June, British Prime Minister David Cameron announced he will offer £1 million in cash to anyone who can solve the world’s biggest problem – whatever that might be. Each year, the X-PRIZE Foundation launches a large-scale, monetary award given to the first team to achieve a specific goal which has the potential to positively impact humanity. The Bill & Melinda Gates Foundation and companies like GE and InnoCentive also put up dollars for innovators through competitions.

The use of prize incentives to motivate problem solving is anything but new. They have existed since at least since 1714 when the British government offered a prize of £20,000 to the person who found a way to accurately determine a ship’s longitude. Yorkshire carpenter and clockmaker John Harrison won the prize after decades of work by inventing a clock that worked at sea. Harrison’s solution revolutionized the maritime world. The commercial hydraulic turbine, machines to saw marble, fire extinguishers and thousands of other products were also invented in response to prize challenges. 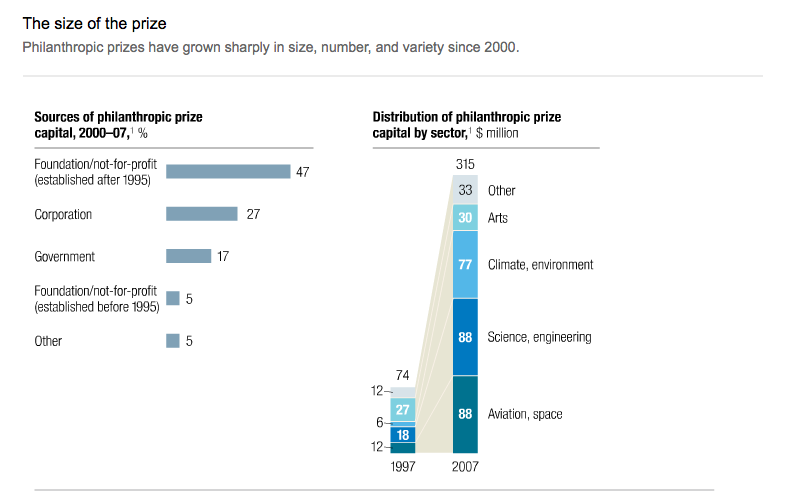 The use of this instrument to spur innovation is currently undergoing a renaissance due to a flood of new philanthropic money wielded by people looking for different ways of doing things and is reinforced by powerful external trends such as the arrival of different attitudes to shifting risk, interest in open source approaches and an increasingly networked, media-driven and technology-intensive world.

In 2009, a report from the McKinsey & Company titled “And the winner is…” concluded that incentive prizes are a unique and powerful tool induce changes because they identify new levels of excellence, influence public perception, encourage specific innovations, build the skills of individuals and mobilize new talent or capital. According to the report, these prizes have several distinctive attributes:

Expressiveness: Prizes embody aspirations, priorities, values, and a commitment to desired changes. Well designed prizes carry an element that makes them newsworthy and media friendly. This messaging and brand-building potential is attractive to corporations looking to burnish their image or wealthy donors seeking to signal their arrival.

Flexibility: Prizes inspire people and teams to push their efforts beyond conventional limits. Freed from an overreliance on narrowly commercial incentives, competitors can turn their efforts to addressing issues that the market may overlook.

Openness: A core power of prizes derives from their ability to attract diverse talent, generate unexpected approaches, and reveal unusual perspectives in the face of a problem or challenge. Low-cost computing power, the research capabilities of the Internet, and the many ways the information technology enables cheap and easy collaboration are also contributing to expand the pool of potential solvers and lower the cost of attempting or recognizing solutions. 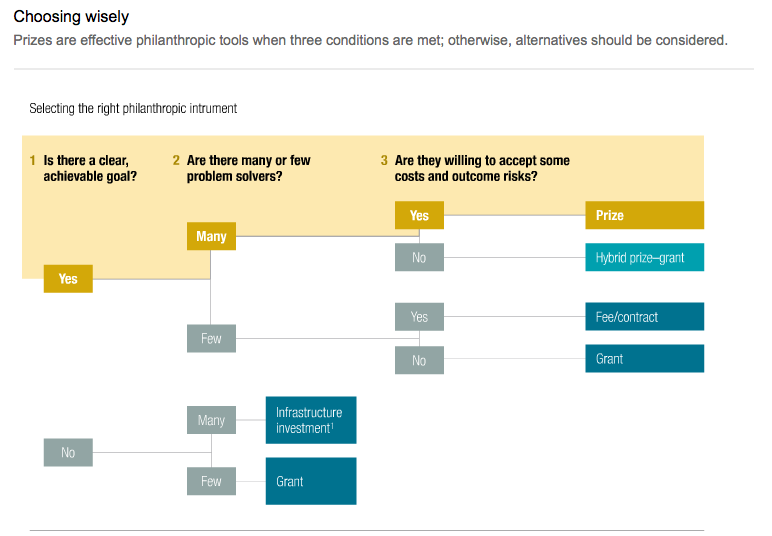 Prizes are still a small business but they are growing sharply in size, number, and variety at roughly 18% per year supported by an industry that has to enhance its effectiveness. However, prizes not always work. When are more effective? McKinsey report concluded that three conditions are paramount: a clear objective, the availability of a relatively large population of potential problem solvers and a willingness on the part of participants to bear some of the costs and risks. If one or more of these conditions can’t be met, other alternatives should be considered.

If you want to delve deeper into the potential of incentivized prizes you can download McKinsey’s full report here.